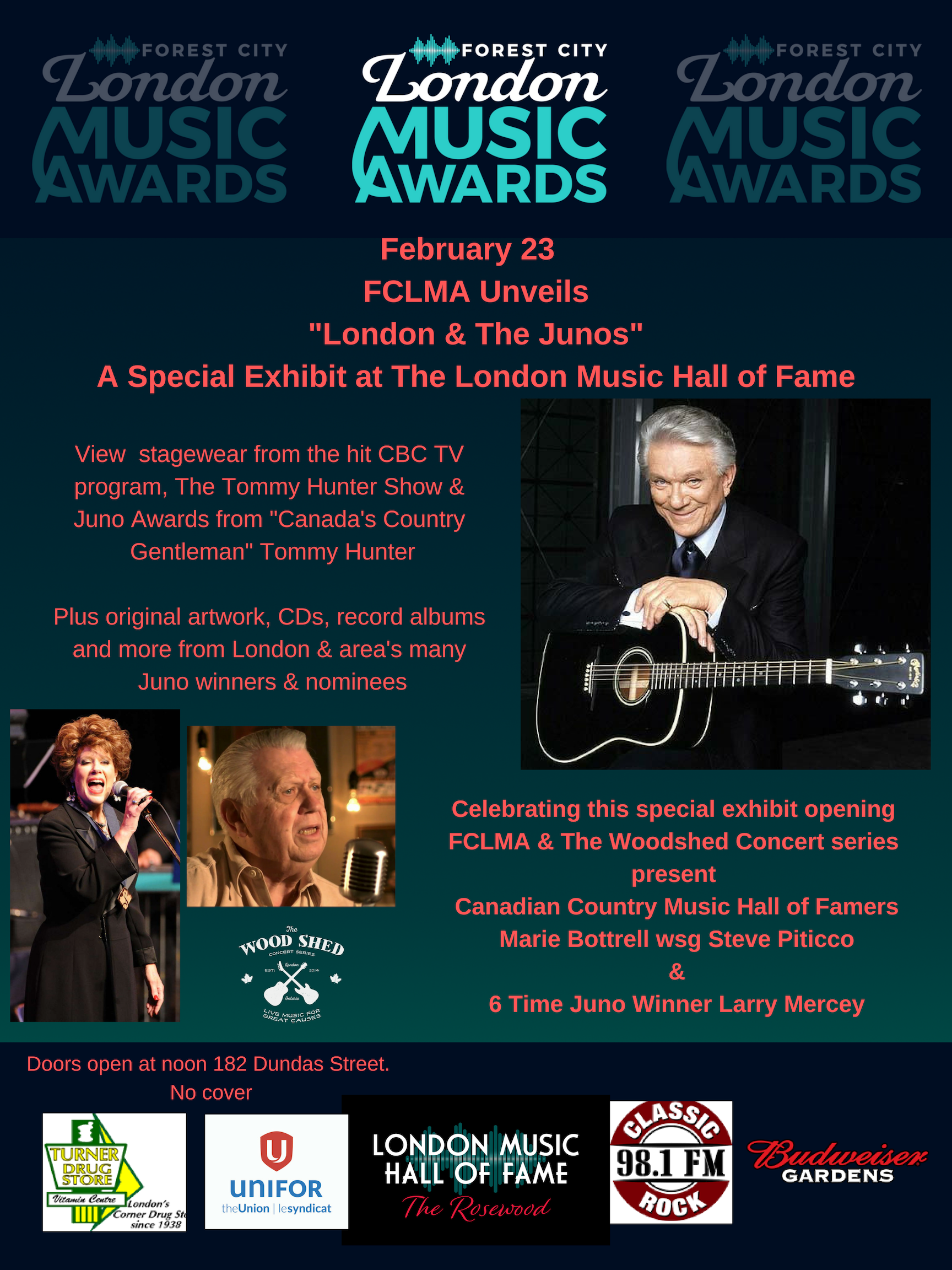 Londoners have a lot to be proud of as the JUNOs arrive in town. The city is host to the biggest music awards event in the country. It is also host to past, present and future award-winning musicians – at the London Music Hall of Fame.

Forest City London Music Awards (FCLMA) invites everyone to check out the city’s prominent role in Canadian music during the JUNOs at the Hall of Fame, 182 Dundas St. – the only Canadian city-specific music hall of fame.

Also free: Woodshed Concert Series and FCLMA present a Hall of Famers performance by Canadian Country Music Hall of Famers Marie Bottrell (with guitarist Steve Piticco) and Larry Mercey. Mercey is a multiple-JUNO winner; Bottrell has eight JUNO nominations. Admission is free — but fans are encouraged to bring a donation for The Kids Mental Health Optimist Club of Canada.

“We wanted to celebrate London’s JUNO winners and nominees in a grassroots way — and are thrilled Larry and Marie can join us,” said FCLMA board member James Stewart Reaney. “They have played awards events over the years. But this is the first time they’ve been on the same bill for us.”

“We love the way the Woodshed has brought London indie, roots and community sounds to gigs since 2014. We also love their commitment to ‘Live music for great causes’ — and look forward to co-hosting more events with them,” he said.

Rena O’Halloran, committee member, added the hall shows a rich history of London’s connection to the JUNOs. “The Hall of Fame has gathered together evidence of London’s impact on the JUNOs. From JUNO statuettes to gold records, original artwork, albums and CDs, you can see it all at our special exhibit, London at the JUNOs.”

The hall itself is worth checking out. For its creative reuse of the former site of Nash Jewellers, the Hall of Fame is nominated for a London Heritage Award Feb. 21. Visitors can see the original mosaic tiled entry and rosewood display cases.

What: Grand opening of the JUNO exhibit

When: Feb. 23, noon to 5 p.m. Woodshed Series Concert with Marie Bottrell and Larry Mercer at 2 p.m.